A person familiar with the matter was quoted by the news site as saying the offer was, “more than anything, about trying to get the conversation started.”

But Iran rejected the offer bluntly, with the state-run Press TV saying on its website: “A senior Iranian official tells Press TV that Tehran will stop its 20-percent uranium enrichment only if the US lifts ALL its sanctions on Iran first.”

An unnamed senior US administration official had said earlier in response to the Politico report that “we have been clear that we are ready to pursue a mutual return” to the 2015 deal limiting Iran’s nuclear program. The official did not explicitly confirm or deny the report.

“We have also been open that we are talking with our [international] partners… about the best way to achieve this, including through a series of initial, mutual steps. We have been looking at options for doing so, including with indirect conversations through our European partners,” the official said.

The report also said that earlier this year, the US floated releasing a small amount of frozen Iranian assets if Iran stopped enriching uranium to 20% in violation of the nuclear accord. Iran, however, rejected the offer, saying it would only do so for a month if the US ended all sanctions on Tehran.

There have not yet been direct talks between Biden administration officials and Iran, with the proposals for launching negotiations mainly relayed by European intermediaries, according to Politico.

The report came just days after a US official said it was unimportant who returns to compliance with the Iranian nuclear deal first, suggesting Washington was softening its position on the stalemate with Tehran.

The Biden administration has repeatedly said it will return to the nuclear deal if Iran first returns to compliance, while Tehran demands the US lift sanctions before it comes back to the accord.

Iran has gradually violated its commitments to the 2015 deal since former US president Donald Trump withdrew in 2018 and put punishing sanctions on Tehran.

Iran in recent months has repeatedly taken steps to breach the agreement and turn up the heat on the US, including by enriching uranium past the accord’s limits and barring UN inspections of its nuclear facilities.

“The issue is do we agree on what steps are going to be taken mutually,” the official said. “It is absolutely not our position that Iran has to come into full compliance before we do anything.”

“If we agree on mutual steps, like we’ll do X, they do Y, the issue of sequence will not be the issue. I don’t know who would go first. I mean we could – it could be simultaneous,” the official said.

Iran’s supreme leader on Sunday reiterated the Islamic Republic’s “definite policy” that Washington must lift all sanctions before Tehran returns to its commitments under deal.

“The country’s policy regarding interaction with JCPOA parties and the JCPOA itself has been clear,” Ayatollah Ali Khamenei said, referring to the accord by its official name, the Joint Comprehensive Plan of Action.

Israeli officials, including Prime Minister Benjamin Netanyahu, have voiced opposition to the Biden administration’s desire to rejoin the deal, putting Jerusalem and Washington at odds on the issue. Some leading Israeli officials in recent months have warned of military action to halt Iran’s nuclear program.

Nonetheless, Israeli and US officials agreed to set up a joint team for sharing intelligence about Iran’s nuclear program during recent strategic talks, according to a report last week. 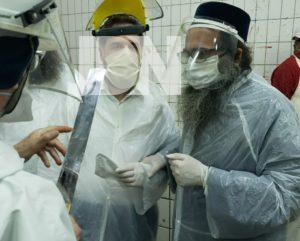